On a recent visit to the Woodbridge Town Clerk’s vault, I came across a copy of an old newspaper article published in the New Haven Register on Sunday, November 26, 1933:

Battered Boulders All That Remain Of Famous Boundary

It seems that back in 1933 lifelong Woodbridge resident S. J. Peck had finally uncovered a bit of Woodbridge history he had been searching more than 20 years to find — one of the boundary stones set out in 1672 to mark the border between what was then the Milford Colony and the New Haven Colony. These two colonies each held claims to the land that would one day be joined together to become the Town of Woodbridge when it was established in 1784. A fascinating article all by itself — you can read it here if you like. 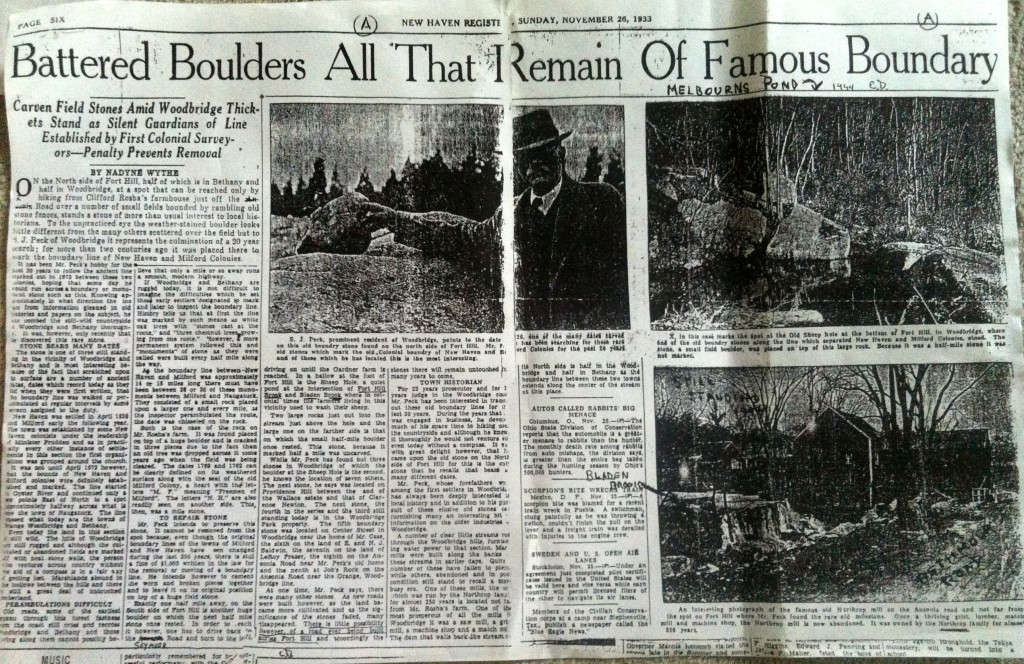 But it got me thinking about several strands of history and I set out to see what else I could find to tie into the story as presented by the local newspaper in 1933.

First, who was S. J. Peck exactly? Here is a closer look at the very grainy reproduction of the photograph that ran in that Sunday’s paper. Mysterious!

Looking first in my genealogy data, I found a Woodbridge resident with the initials S. J. and the surname Peck who fits the approximate dates to make him roughly age 66 in 1933. He is Silas J. Peck, the son of Henry Clay Peck and Susan Cornelia Baldwin, born in 1867. I also found this Silas J. in the census records of Woodbridge in 1870: 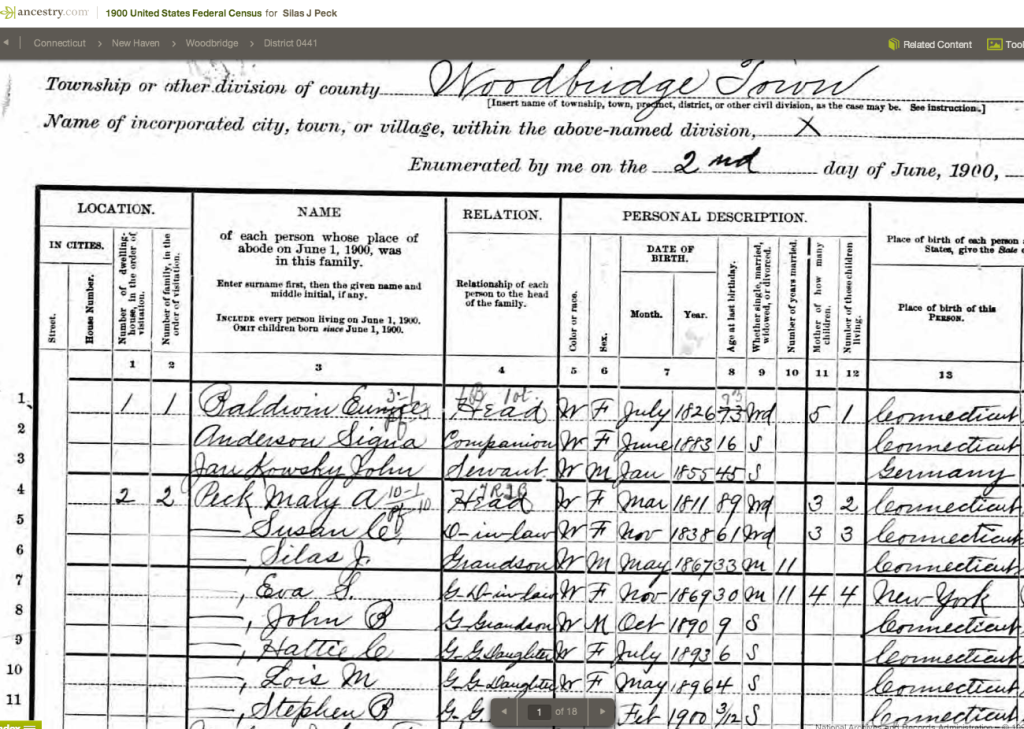 To confirm that this is most likely the same S.J. Peck in the news in 1933, I looked up his death date in the Woodbridge Vital Records: it turns out to be September 1, 1943. According to this record, his full name is Silas Judson Peck. Then searching the Find-a-Grave website, we can see his gravestone standing in the Milfordside Cemetery on Racebrook Road, linked with his wife Eva’s gravestone nearby:

Silas and Eva also seem familiar to me as a couple, so I look for them in the book Historic Woodbridge and find them to be one time owners of the house at 131 Ansonia Road:

Historically important for its long association with the Baldwin-Peck family, this well-preserved house was built about 1800 by Ephraim Baldwin on property that he purchased from Colonel Alling and it descended to Silas J. Peck, the great-grandson of the original owner, in the early twentieth century. Baldwin (1766- 1835), the son of Barnabas and the grandson of the Lieutenant Barnabas who settled in Woodbridge in 1742, married Martha ? (1770-1856). In 1870 Silas J. Peck (b. 1808) was living here with his wife, Mary Adeline Baldwin (b. 1812). With them were his married son, Henry C., his daughter-in-law, and their two children. The younger child, also Silas J. (b. 1867)., who later inherited the property, married Eva S. Hollenbeck in 1889. There are several interesting stories associated with the property. One is that Captain Ephraim Baldwin, who received his title from service in the state militia, used the meadow at the rear of the house as a drill field. Also, according to local sources, the addition at the rear of the wing was originally a slave quarters on the property which was later attached to the house.

Well, those names are certainly ringing some bells! We can fill in some blanks: we have Captain Ephraim Baldwin, who was elected to represent Woodbridge in the Connecticut State Legislature and died at Hartford in 1835. He was married to Martha Newton, daughter of Lt. Samuel Newton and Mary Camp. In turn, Ephraim and Martha’s daughter, Mary Adeline Baldwin, married Silas Julius Peck and had Henry (S.J. Peck’s father) in 1839 — so this seems to certainly be the household described in both the 1870 and 1900 census records. Here is a more recent photo of the house on Ansonia Road. 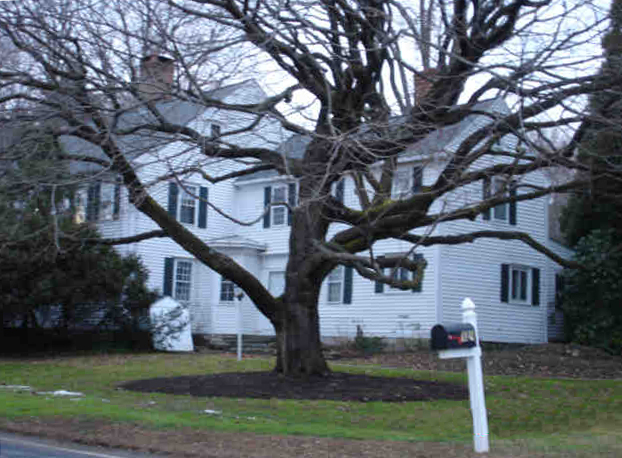 But what is the connection between Captain Ephraim Baldwin (S.J.’s great-grandfather, from whom he inherits the house at 131 Ansonia Road) and the previous owner of the land, Colonel Alling? There are two Revolutionary War Patriots named Alling buried in the Eastside Cemetery, Samuel Alling (~1715 – 1788) and his son, Roger Alling V (1741-1824). Is one of them the Colonel Alling referred to here? Hmmm… that’s a search for another day perhaps?

Let’s get back to the 1933 news article. Now that we know who S.J. is… how about the other people mentioned in the story? And, with all that knowledge of “who” will that help us figure out “where” — as in, “Would we be able to find this boundary marker today?” 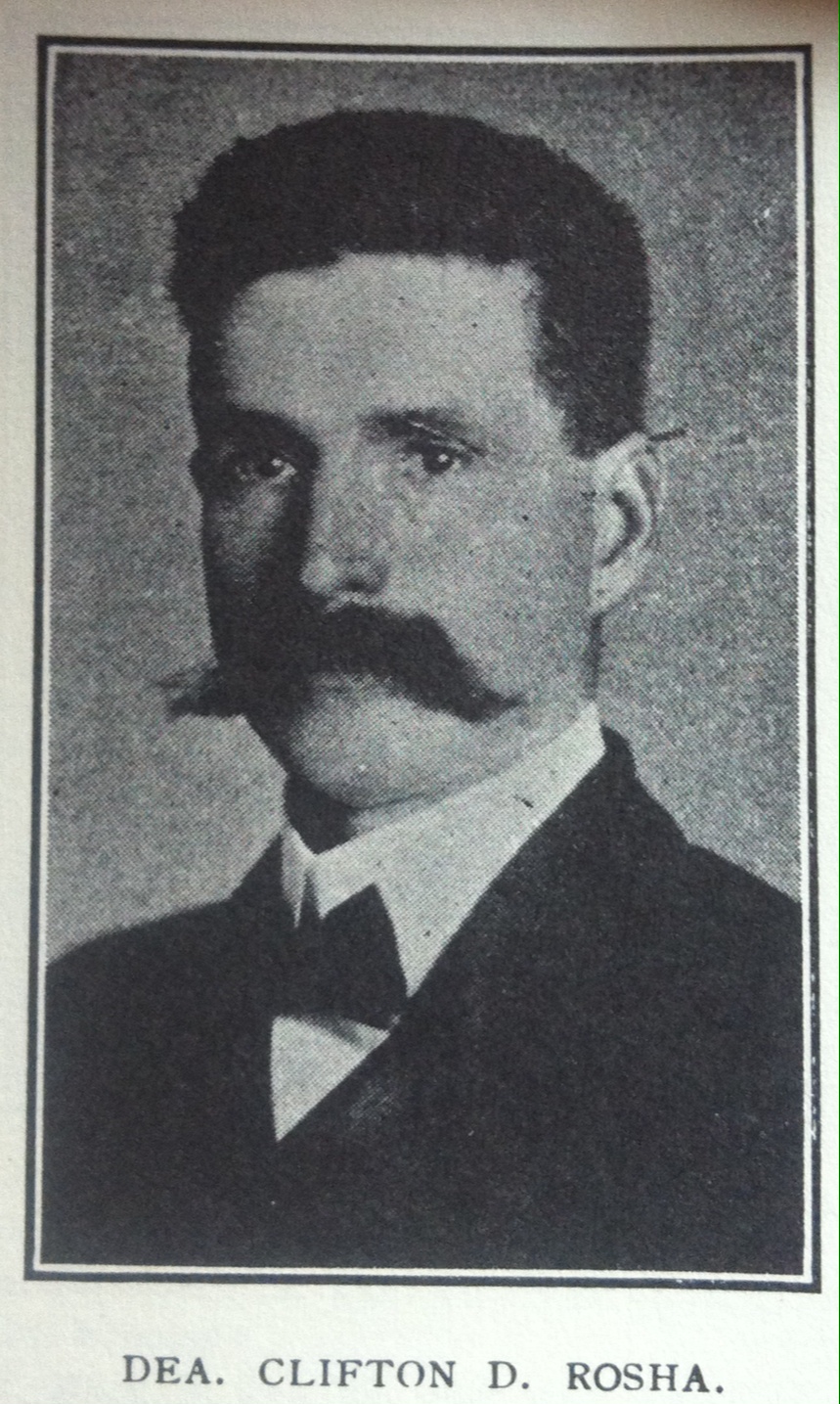 The name Clifton Rosha is familiar, but he’s not a character from olden days in Woodbridge; rather he was a prominent citizen in long ago Bethany. He was a Deacon in the Congregational Church, and Tax Collector of Bethany from 1902 to 1949 (I imagine he must have known my great-great grandfather, Jerome Andrew Downs, Jr., who was First Selectman 1903-1908). I remember reading about Clifton in William Carvosso Sharpe’s Bethany Sketches & Records — here he is as pictured on page 187 (photo at right).

But where did Clifton live in 1933 when S.J. set off from his farm to find the hidden boundary marker? We have a few clues in the text of the story — Bladen Brook, Fort Hill, the Old Sheep Hole — as well as a note hand-written into the margin that corrects “Ansonia Road” to “Seymour Road.” We know Clifton Rosha lives on the Bethany side of the border with Woodbridge. Let’s look through Alice Bice Bunton’s book Bethany’s Old Houses and Community Buildings and focus on roads that border Woodbridge. Here on page 26 is a write-up of the Clark Hotchkiss House on Bethmour Road:

Ah, ha! Clifton Rosha is the grandson of Clark Hotchkiss and inherited his farm on Bethmour Road. And Clark is already in my genealogy data (he is my 3rd cousin, 6 times removed, which makes Clifton a distant cousin as well — and it’s a good bet that Clifton and Jerome knew in their lifetimes that they were 5th cousins, once removed). Here is Clark Hotchkiss himself (from Sharpe’s book), as well as a circa 1900 photo of his farmhouse (from Alice Bice Bunton’s book).

Well, we have a rough location for this old boundary marker! Let’s take a look at a map now. According to the entry in Alice’s book, before it burned down in February 1972 the Clark Hotchkiss House stood on the east side of Bethmour Road, between Atwater Road to the north and Anella Drive to the south — approximately where I’ve marked the green x on this map (note the proximity of the Bethany-Woodbridge town line, in green, at the bottom of the image): 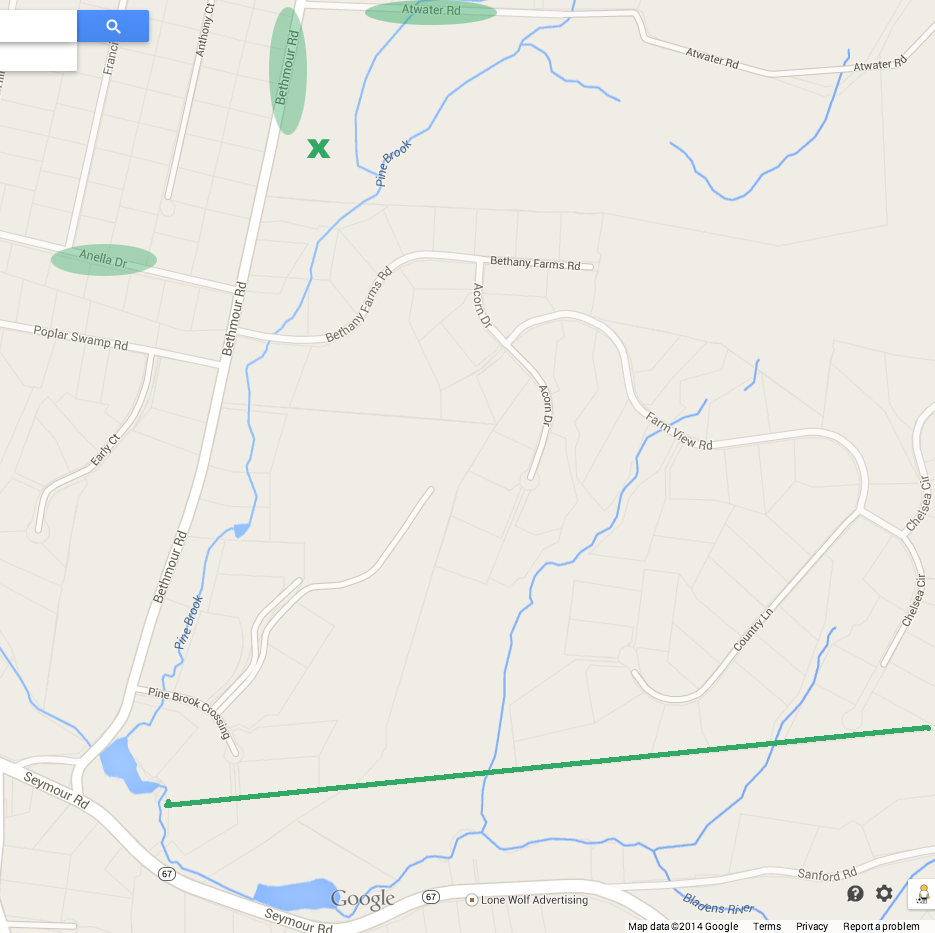 And here is a much older map of how the Milford Colony and the New Haven Colony line looked back in the day when it was established (the hatched-in areas represent the Milford Colony territory — in the area of Woodbridge known today as “Milfordside”): 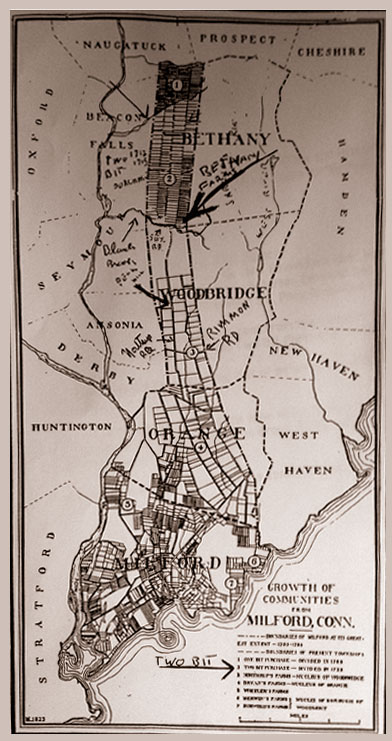 So perhaps next steps can include a few inquiries in Bethany to see if the recent Bethany Farms subdivision project uncovered any clues to the exact whereabouts of old S.J.’s boundary stone…

Update #1: I forgot to check one other source for information about S.J. Peck — A History of Woodbridge, a booklet published for the country’s bicentennial in 1976. It turns out, another reason the name seems so familiar is because he was First Selectman of Woodbridge, from 1912 to 1916. Here he is, a bit younger and more in focus.

Update #2: I wrote to a friend in Bethany who forwarded my inquiry to Will Brinton there. He shared the following story (readers may contact Mr. Brinton by email if you would like to know more):

“I am somewhat familiar with the boundary stone in Bethany Farms.  I recall the newspaper article from the 1930s, with the photo of S.J. Peck pointing it out. My father was intrigued with this as well, so when Bethany Farms was being developed in the 1990s, he contacted Hiram Carrington to see if he knew where it was [S.J.’s boundary marker stone].  Indeed he did, as his father, Hiram Sr., had shown him the location years before.  Mr. Spath, the owner/engineer for the project was interested as well, so we did a site visit with Hi Carrington, Mr. Spath, my father, my brother Bob and me.  This was before any roads had been put in, so there was a lot of underbrush, but we eventually found the site.  There was no marked stone like in the photo from the 1930s — someone must have taken it as a souvenir years ago. I can’t recall if Hiram had ever seen the stone or if it was gone when his father showed him [the location]. Hi was born in 1930, so he probably saw it some time in the late 30s or early 40s.  However, there were a number of small stones on top of a large boulder to mark the spot.
I think my father asked Mr. Spath to put the location on the subdivision map, but I don’t remember if this actually happened or not.  If I remember correctly, the site ended up in one of the open space set-asides, now owned by the Bethany Land Trust, so it should not have been disturbed by the development.”

Update #3: Another message from Will Brinton, received on July 9th 2014:

“This morning I stopped at the Bethany Historical Society to see if we had any additional data.  The slim file includes a copy of the 1933 article, a section of the Bethany Farms subdivision map that shows the general area (but not exact location) and finally a few photographs of the site visit with Hi Carrington in 1994.
Based on that, I drove through Bethany Farms today and was able to find the boulder pretty easily. It lies in “open space #2″, about 25 feet south of Farm View Road. Glancing at a town map, this lines up with Pole Hill Road, a modern day relic of the old Milford/New Haven boundary. It also aligns with Beacon Cap, the northeast corner of the old Milford Colony.” 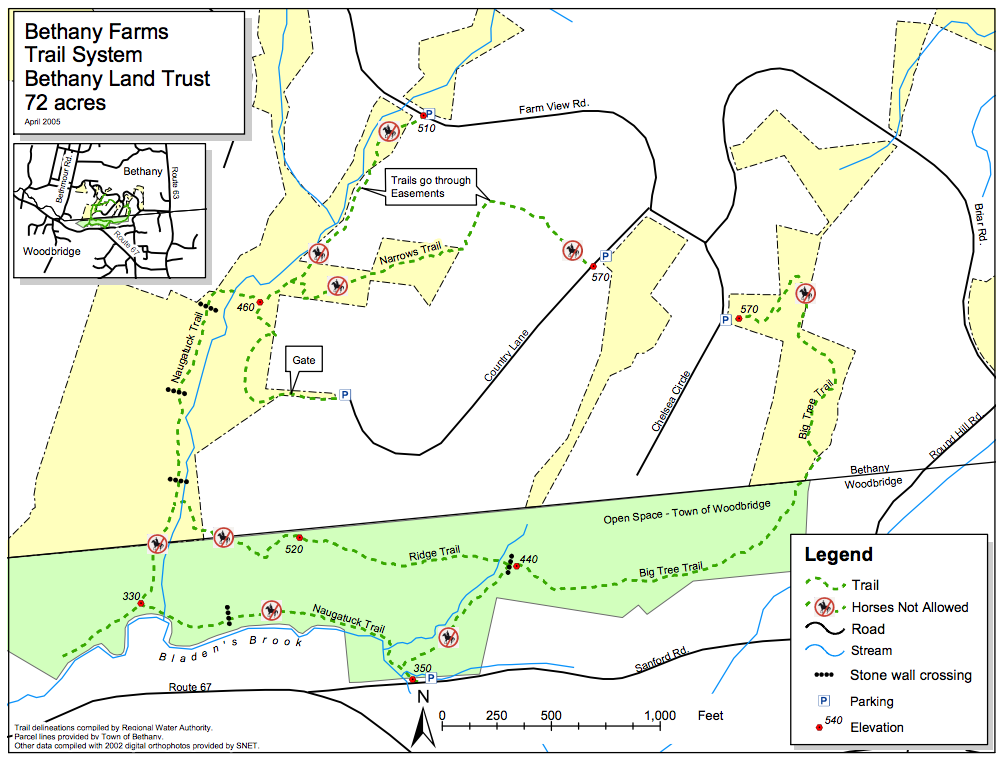 With this, I think we have solved our mystery — or perhaps more accurately, we have re-solved S.J. Peck’s mystery! If anyone would like to take a look in person at what remains of this old boundary marker, here is a link to download the map of this parcel from the Bethany Land Trust. Enjoy!