Indeed, there are Deeds!

by SheilaMc7 on July 1, 2015 in blog, Families, Genealogy, history, Sperry

Now that we’ve returned from our Visit to Sperry Park, let’s look now at some documents! The land that makes up both Sperry Park and the adjoining Henry C. Hickox Memorial Park was donated to the Town of Woodbridge in 1907 and 1955, respectively. Just prior to the donation of the Hickox parcel, a map was drawn up from information apparently supplied by Mrs. Helen Newton. Wouldn’t it be nice to get our hands on that drawing! We will have to put out some feelers and see if we can turn it up somewhere along the line…

For now, let’s start by looking in the Land Records in the Woodbridge Town Hall vault. Here in Volume 27, page 121 begins to tell the tale of the donation of the Sperry Park parcel: 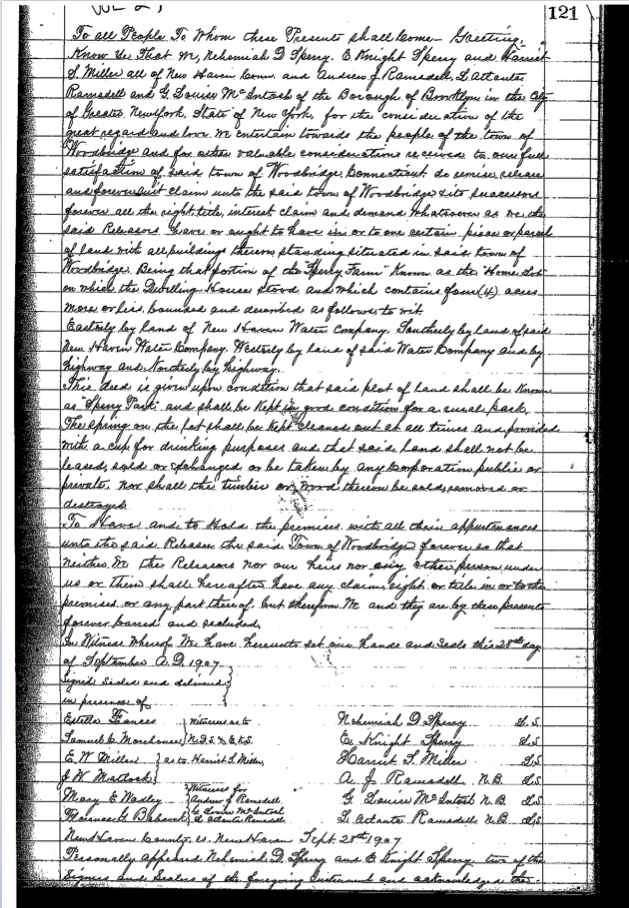 As we take a closer look at the deed documents, let’s also see if we can place the people named in them. It’s remarkable how the families in this little corner of olden Woodbridge intermarried, and made transfers of property among family members over the years.

This first deed, mentioned in the CUPOP Summary for “Sperry Park and Henry C. Hickox Memorial Park,” is a Quitclaim Deed from members of the Sperry family to the Town of Woodbridge in 1907. Here we find a listing of the then-living heirs of Enoch and Mary Atlanta Sperry:

The first two individuals are Enoch and Mary’s surviving sons, Nehemiah Day and Enoch Knight. The next mentioned is their first-born son Lucien Wells Sperry and his wife Harriet Abigail Sperry’s only child, Harriet Adella Sperry Miller. These three heirs are all living in New Haven in 1907. Harriet Adella married Eugene Spencer Miller on October 21, 1885 and she became a widow at age 38 when Eugene passed away on June 3, 1893 at age 44. Her father Lucien had served as Mayor of New Haven from 1866 to 1868, but had experienced a reversal of fortune that culminated in his death by suicide on June 26, 1890. Cryptically referred to in a brief news account from all the way out west in the pages of the San Francisco Call  there surely must be more to the story than what is conveyed in this two sentence report: 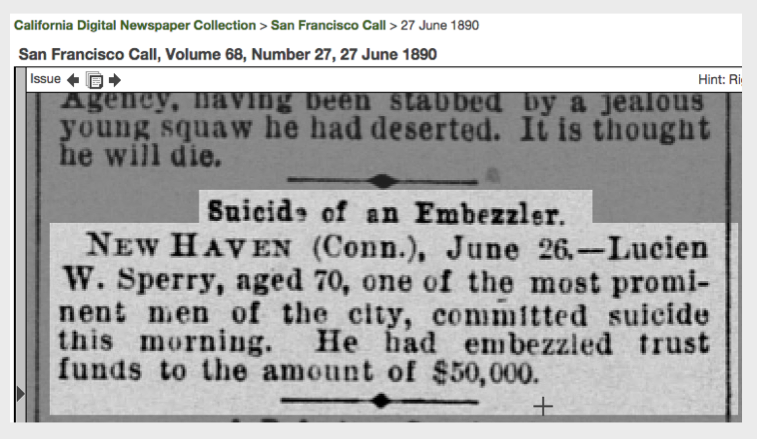 But for now, turning back to the property deed, we next see listed the husband and surviving children of Enoch and Mary’s only daughter Laura Ann Sperry, who had died at age 43 in 1879. About three years after her father’s murder, Laura had married Andrew J. Ramsdell on January 11, 1879 and the couple had children: Laura Atlanta Ramsdell [born about 1866 and died Jan. 3, 1951, and is buried with her parents in Evergreen Cemetery in New Haven], and Grace Louise Ramsdell [born about 1870 and died after 1940] who married John A. McIntosh sometime around 1892. This couple’s only child, Laura Louise McIntosh was born Aug. 17, 1898 and died Feb. 22, 1920, and was buried in New York. Two more Ramsdell family members, Adeline S. Ramsdell [who died Sep. 14, 1915] and Elmer S. Ramsdell [who died 26 Jul 1883], are buried with Laura Ann and her husband in Evergreen Cemetery in New Haven, but their relationships are not clear.