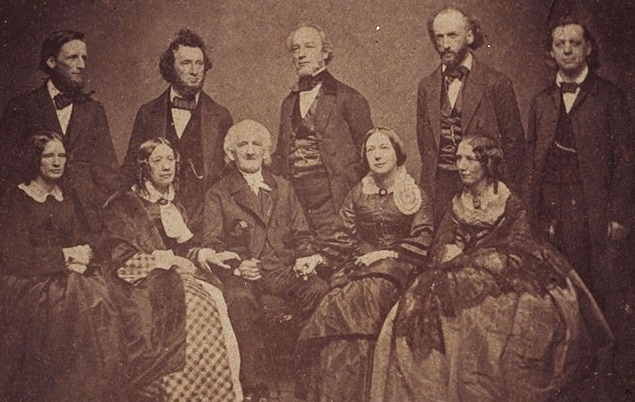 The Beecher Family in America… and Woodbridge

by SheilaMc7 on December 31, 2021 in Families, Genealogy, history, Uncategorized

What do we know about the origins of the Beecher family in America, and how do the Beechers who lived in long ago days here in Woodbridge connect to the more famous members of this family?

The noted Presbyterian minister and social reformer Lyman Beecher (born 1775 in New Haven, CT and died 1863 in Brooklyn, NY) is buried in Grove Street cemetery. He had 3 wives and 13 children; nine with first wife Roxana Foote, and four with his second wife Harriet Porter. Of his five daughters and eight sons, nine became noteworthy writers. His children include those pictured with him in this circa 1858 photograph by Matthew Brady — standing in the back row left to right; Thomas, William, Edward, Charles, Henry Ward, and seated from left to right, Isabella, Catherine, Mary, and Harriet.

But what of Lyman Beecher’s family of origin? His father was the blacksmith David Beecher (1738-1805) and his mother was Esther Hawley Lyman, David’s 3rd wife. Esther died at age 27 on October 16th 1775 just a few days after giving birth to her only child. Esther’s sister Katherine Lyman and her husband Lot Benton, who had no children of their own, raised Lyman from infancy.

What more can we learn about David Beecher? There were several members of the Beecher family named David who lived contemprarily in the greater New Haven area, so let’s begin by identifying which is which. Lyman’s father David was a son of Nathaniel Beecher (1706-1786), who himself was a son of Joseph Beecher (1647-1728), one of the five sons of Isaac Beecher who arrived in New Haven with his mother in the spring of 1638 to discover that his father John Beecher had become the first European to die in the newly founded colony.

Lyman’s grandfather Nathaniel Beecher married Sarah Sperry (1712-1796) who was a daughter of Ebenezer Sperry and Abigail Dickerman. Ebenezer and his brother Nathaniel, sons of Richard Sperry, married sisters — so it is quite likely that, through his mother Sarah, David Beecher was well acquainted with the branch of the Beecher family that settled in the area of the old New Haven colony that came to be incorporated as Woodbridge, where Sarah’s parents and namesake Aunt Sarah along with her husband Nathaniel Sperry lived (it is within this timeframe that their son Nathaniel Sperry, Jr. sells part of the family’s land to establish the East Side Cemetery on today’s Pease Road).

According to the Beecher genealogy, Lyman’s grandfather Nathaniel Beecher was also a blacksmith and when he died in 1786 left to his 47 year-old son David his house, blacksmith tools and shop in New Haven. David’s brother Hezekiah (1753-1820) was a blacksmith too and lived and worked with David, near the corner of George and College streets. Let’s look at some maps to picture that location:

The 1748 map of New Haven helps us understand some of the ‘who’ and ‘where’ aspects of the period leading up to the Revolution. Although the names listed on this map are mainly the generation before those who became prominent citizens during the war, we can trace these families down another generation by looking at land records. For example, the farm house marked as ‘Nath. Mix’ on Chapel Street north of the corner of College Street where the Yale College President resides, belonged to Nathaniel Mix (1692-1756) and was next owned by his son Jabez Mix (1731-1762) who outlived his father by only six years. According to a post titled A House, Barn, Home Lot and Orchard on the Roger Sherman House website, the ownership record of this 2-acre lot continues: “In two transactions in 1760 and 1762, Jabez Mix deeded the entire home-lot and the old home to Roger Sherman…”

It appears then that at the time of the Revolution, Roger Sherman is a close New Haven neighbor to the blacksmiths David and Hezekiah Beecher. Indeed, their connections go a bit further — as news of the shot heard round the world on April 19th 1775 reach New Haven on April 21st we find some familiar names listed among the members of the 2nd Company of the Governor’s Foot Guards led by Captain Benedict Arnold who will famously demand the keys to the Powder House held by the Selectmen of New Haven the next day. The company then sets out from New Haven in response to the Lexington Alarm and serves 28 days in this capacity. Among these men are Roger Sherman’s son Captain John Sherman (1750-1802) and the blacksmith Hezekiah Beecher.

There are several other intriguing connections between members of this company, the Beecher family, and the property in Woodbridge known as Clover Hill Farm , including a son-in-law of owner Captain John Beecher (1722-1793) by the name of Jonathan Austin (1745-1823), and the man who owned Clover Hill subsequent to Roger Sherman, James Hillhouse (1754-1832) — see War Service Records for the full list.

The Amity Branch of the Beecher Family

Meanwhile, further away from this downtown New Haven location, another David Beecher has established himself in the community of Amity…

He is known as Captain David Beecher (1743-1780) and he is buried in the Old Bethany Cemetery. Born just five years before the blacksmith David Beecher (his 2nd cousin once removed), Captain David’s parents are Isaac Beecher (1717-1801) and Mabel Hotchkiss (1719-1798) who are also buried in the same cemetery having outlived their son David. Isaac is a son of Hannah Farrington and Samuel Beecher (abt. 1687-1760) whose mother was Joanna Roberts and father was Isaac Beecher, Jr. (1650-1708), namesake son of the first Isaac Beecher to arrive in New Haven, and brother to blacksmith David Beecher’s grandfather Joseph. Joanna’s gravestone is one of the limited number of stones that were removed from the original burying ground on the upper Green in the center of New Haven’s Nine Squares and placed along the wall of Grove Street Cemetery — the other members of her family from this time period no doubt were also buried on the Green, but their gravestones have been lost to time.

Interestingly, Captain David also has a brother named Hezekiah — he is Deacon Hezekiah Beecher (1755-1828) and he is buried in the Sperry Cemetery in Bethany.