The quality of our public drinking water has long been of consequence in Woodbridge. What happens on the watershed land of our town has health impacts down stream. Indeed, in late winter and early spring of 1901, the Journal Courier newspaper carried an alarming headline on page one:

…Up to five o’clock yesterday afternoon the recorded number of typhoid cases in New Haven was 211. It was learned last night that this number does not by any means represent the present status of the epidemic. …

The article describes the extent of the outbreak throughout New Haven’s neighborhoods that rely for their drinking water on the lakes in Woodbridge and Bethany, “The infection now extends severely through the Second, Third, Fourth, Ninth and Tenth wards, which have all been supplied with the Dawson water.” The scope of the danger to the people of New Haven is made clear, “It was stated that many cases of typhoid are serious and many deaths are to be expected.” 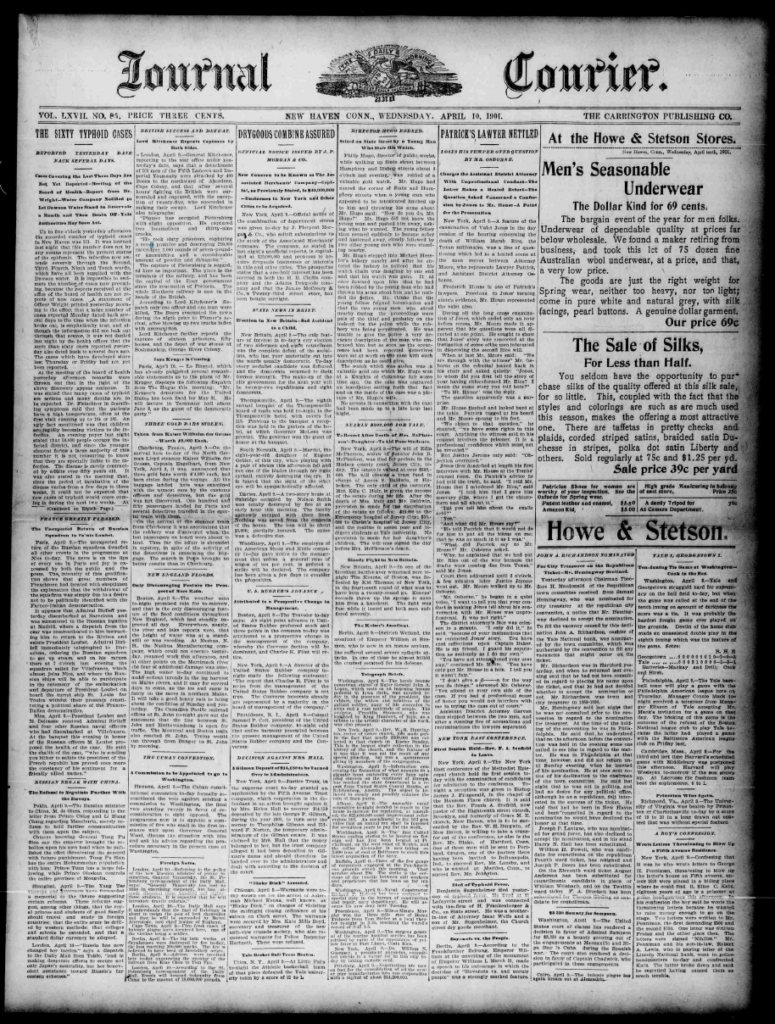 The front page of the April 10, 1901 edition of the New Haven Journal Courier (click to enlarge)

Later in the article (which continued on page 8 of the newspaper, see below), New Haven Health Official Dr. Wright presented his full report of the cause:

“Mr. President and gentlemen of the Board of Health:

I beg leave to call your attention to a number of cases of typhoid fever now prevailing in New Haven and lay before you a full report of the situation. On the morning of April 3 (last Wednesday) six cases of this disease were reported by two physicians, each reporting three cases. While this number is unusual for this season of the year, there seemed to be nothing to attract special attention, but during the latter part of the day repeated inquiries by physicians and the fact that an unusual number of blood specimens had been sent to the bacteriologist to have the Widals test applied, excited my suspicion that we were on the verge of an outbreak of this disease. This was increased at a meeting of the New Haven Medical Association held the same evening, when many physicians stated that they were in attendance upon persons whom they suspected to be ill with the disease. The next morning I came to this office very early that I   might find if more cases had been reported, and found eight new cases. The location of these cases and conversations by telephone with several physicians led me at once to believe the trouble was in the water supply, as all of the cases were in the western part of the city, extending north and east as far as Dixwell Avenue and south and east as far as Congress and Howard avenues.

My next move was to telephone those physicians residing in the adjoining town whom I knew to be practicing in the vicinity of the storage lakes and along the streams leading to the same. Several cases were learned of in this way in different localities, but the only ones that could be regarded as likely to cause the outbreak were those happening in a German family living in Woodbridge near the Bethany line and nearly a mile above Lake Dawson.

I at once consulted with Dr. Daggett, the secretary of the New Haven Water company and ascertained that the western part of the city was wholly supplied with water from this lake, and that the parts extending north and south to the lines above given, were partially supplied from the same service, the quantity and distance depending upon the pressure in the pipes of the water from other lakes.

I immediately made an appointment with the physician who had been in attendance upon the Woodbridge cases to visit the family. I wished him to accompanying me as I believed the people would talk more freely in his presence. As soon as possible we drove out to the place which is about eight or nine miles from the city. I found that there had been three persons sick with typhoid fever in the house. They had called the doctor to   the first case January 27, and he had made but a few visits.

On March 4 he had been again called and this time he found two more sick. He instructed the head of the family to bury the fecal discharges, and in carrying out the instructions the man had taken them several hundred feet from the house and buried them as I estimate from his description, about six or eight inches deep in plowed ground distributed over an area of at least 100 feet square and within 50 to 100 feet of a dry waterway. All of this was told to me in the presence of the physician and I believe the same to be true.

The next day I am told by the officials of the water company, when four or five of them visited him, he said that he had buried the discharges in a very circumscribed area, and at a depth of two feet. This is at variance with his statements to me, and seems hardly probable as there was more or less frost in the ground and the amount of care necessary to do this is not consistent with the general appearance of the premises.

On March 11 came the first heavy rainfall, and a few days later the second. Just when this fecal matter was washed away is only a conjecture, but that it was is evidenced by the fact that the surface of the ground all around in the vicinity of the place where the discharges had been buried had been excavated by the heavy rains, having furrows from three to six inches deep, leading to the edge of the waterway, through which water could only escape in a direction leading directly to Lake Dawson.

Fortunately I was able to observe how large a quantity of water sometimes goes down this course, as it was raining heavily while I was there, and a stream several feet wide was running violently past at the time.

Upon my return home at about 5:30 p.m. I notified the secretary of the Water company that I believed I had located the source of the infection, and that evening, by request, met the president, secretary and Dr. H.E. Smith, the chemical expert of the Water company, and laid the facts as above stated before them, with the result that in my presence and without a protest the water from the lake was ordered shut off from the supply pipes and the waste gates opened.

The next day the pipes in the city containing water from this source were blown off. The only water from this lake now used is in about twenty houses in Westville, where it is impossible to supply other water and the occupants of the houses have been warned of the danger of using the water without boiling. Within twenty-four hours of the first evidence of a serious outbreak of typhoid the source of the infection had been, to my mind, definitely located and steps had been taken to prevent further infection from this source.

On April 3 we had reported six cases, April 4 ten cases, April 5 thirty-six cases and April 6 the same number. At the time of the presentation of this report there have been reported a total of 211 cases, and the diagnosis of typhoid fever in over seventy of these has been verified by Widal’s test.

In addition to the above investigation we are as fast as possible ascertaining of each individual case the water — whether city, well or spring, ice and milk supplies, whether or not the sick persons have eaten raw oysters or clams, celery or other uncooked vegetables, the sanitary conditions of the premises, the condition of the plumbing, whether or not the sick one has been out of the city within three weeks of being taken ill and finally if proper instructions have been given in regard to the disinfection of the excreta.

It is to be expected, even if we have been so fortunate as to have properly located the source of the infection that there will be many cases for at least two weeks, and there will be secondary cases in other parts of the city.

The water gates of Lake Dawson have been open since very early in the morning of April 5, and I understand the lake should be emptied in two or three days. The heavy rains of the past few days have kept the lake full notwithstanding the gates are open. The pond by this time must be pretty well flushed out, and any pathogenic material in there must be pretty well diluted.

It is not in the province of your body to order how the lake or premises upon which the infection is assumed to originate, shall be disinfected, but it is in your power to prevent the water being brought within the limits of New Haven until you are satisfied that such is free from infection.

As it is probable that pathogenic bacteria are destroyed by the common water bacteria within a few weeks and that any disease-producing bacteria in the water are now largely diluted, I recommend that your honorable board notify the New Haven Water company that water from Lake Dawson cannot be supplied to consumers within the limits of New Haven until the water now in the lake has stood for at least one month and then drawn off and the lake filled with freshwater. 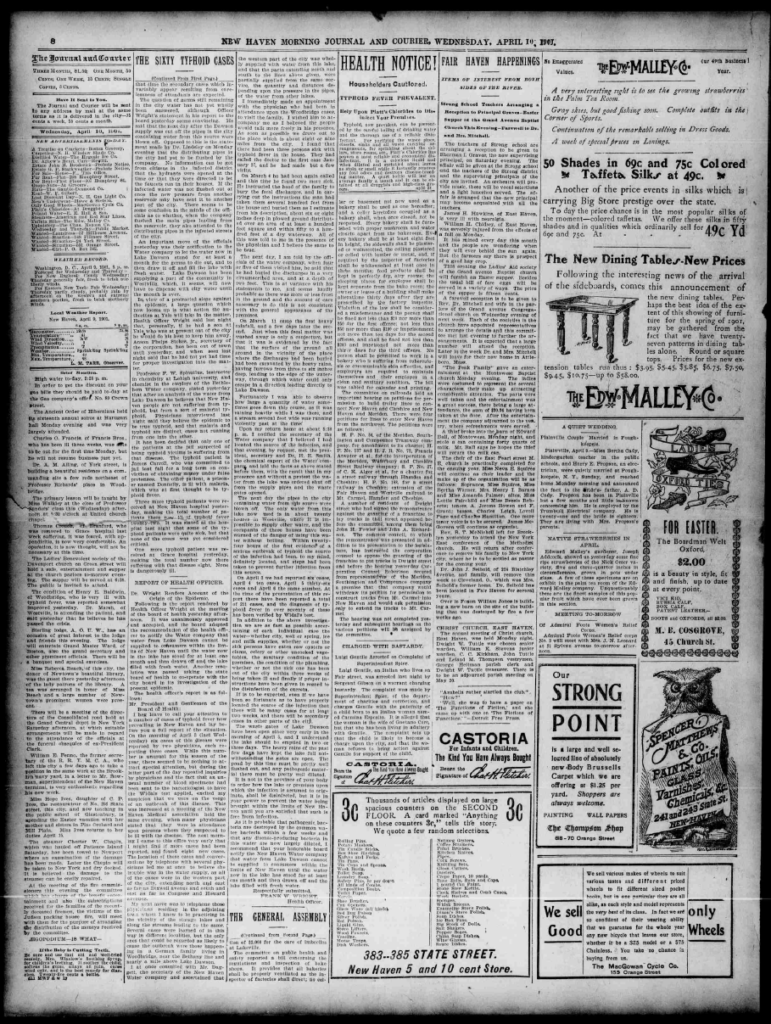 The continuation of the front page story on page 8 of the April 10, 1901 edition of the New Haven Journal Courier (click to enlarge)

The above newspaper articles were retrieved from the Library of Congress’s Chronicling America website. You can also view a PDF set of pages from the Journal Courier’s coverage of the 1901 Typhoid Epidemic.

← A Civil War Story: Correspondence from a Nephew to His Aunt in the wake of the Fall of Richmond